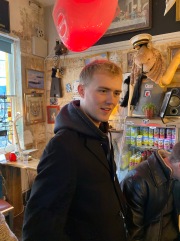 Maximilian Raynor is an aspiring Fashion Designer, based in London, United Kingdom. Studying at the world famous BA Fashion course at Central Saint Martins, Maximilian is first and foremost a designer, but works also in styling, costume, artistic direction and fashion-writing.

“I am a conceptual, narrative-based designer who habitually references historical details and literature in my work. My skills in theatre and direction inform my talents in fashion, in that I imagine the ‘world’ I design for and the characters within it” Maximilian’s experience within the performing arts (as an actor and singer) makes him a confident public speaker. An obsessive worker and active collaborator with specialist areas ranging from design development, pattern cutting and conceptual design, through fashion promotional skills such as branding, styling and art direction to photography.

At the age of ten Maximilian sent designs to Vivienne Westwood, expressing his absolute determination to create intelligent and expressive fashion. Receiving a personally written response from Vivienne, he was invited for work experience and to attend her London Fashion Week show. Maximilian cites Vivienne’s advice to become a well-rounded individual, with knowledge outside fashion alone as a core reason for his historically referenced and literature-inspired design-work.

With 100% from his foundation course at Ravensbourne, Maximilian now studies on the world renowned fashion design course at Central Saint Martins, following in the footsteps of John Galliano, Alexander McQueen and Stella McCartney to name but three. Rich with narrative, Maximilian explores and develops characters through his work, be it within the realm of design, art direction or editorial styling. This stems from his experience writing and directing plays as well as acting and starring in multiple student productions, with Derby Live Youth Theatre and National Youth Theatre. His love for character and costume explains why theatricality, music and setting play such an important role in his design work.

Maximilian has worked in the John Smedley Knitwear archives cataloguing historical garments and recording the Smedley family on a trip around their ancestral home of Lea Green in Derbyshire.

Having exposure to the process of styling a collection and pulling looks for large and small-scale fashion shoots when working with revered stylist Anders Soelvsten Thomsen as well as first hand experience at London Fashion Week, both backstage at ‘Osman’ and ‘Natasha Zinko’ and front of house for Natalia Alaverdian’s label ‘A.W.A.K.E’ led Maximilian to a short placement with ‘Mulberry’. Inspired by watching Jonny Coco and Lotta Volkova’s process first hand, Maximilian styled and directed a Brontëan/ gothic-literature inspired editorial, titled ‘Respectable Sins’ set on a bleak, snow covered Stanton Moor in Derbyshire. This shoot led to his being asked to style a shoot with photographer Alex Piñero for ‘The Pink Prince Magazine’.   Maximilian produced a promotional mini-documentary for Central Saint Martins ‘Fashion Design with Marketing’ pathway and curated a week long ‘takeover’ of the university’s instagram for its 61 thousand followers.  Maximilian’s first year ‘White Project’ for Central Saint Martins was photographed for Notion magazine’s cover feature of rapper Koffee.

As well as fashion Maximilian has worked in film, assisting costumer designer Grace Snell on a ‘Pride in London’ commercial and on the Norfolk set of Joanna’s Hogg’s film ‘The Souvenir: Part II’.

“I will continue to explore all the avenues that interest me, aiming to gain invaluable experience and industry-contacts before graduation”